Progressive forces in shooting & hunting are gathering strength, as women take a more assertive role in this male-dominated field. Linking the right to bear arms with traditional feminist concerns like women’s shelters, healthcare, skills training, crisis counselling & childcare makes so much sense. The vanguard of this enlightened approach is the International Coalition for Women in Shooting & Hunting (no kidding!), headed by (sole trader?) Dr Samara Phedran. It’s unclear who or what the ‘international coalition’ is, but it helps to think big.

ICWSH research, no doubt relying on the good doctor’s scientific training, has concluded (based on statistically insignificant sample sizes) that Australia’s draconian gun laws have not made any difference to the incidence of mass shootings here compared to NZ without such laws. Having established this unlikely nexus between useless gun control and worthy women’s issues, she argues that money currently spent on the former would be better diverted to the latter. No doubt further research will also prove that women’s hormones are a match for men’s in testosterone-dominated shooting & hunting culture. This is all cutting-edge stuff, and so beguiling!

In recent times Kookyniers have been drawn to a nascent political party struggling for recognition – the Indoor Shooters Party. It already has a solid female membership because of the domestic nature of indoor shooting, but lacks analytical resources to inform its policy platform development. Affiliation with ICWSH may help with more evidence-based policy-making. 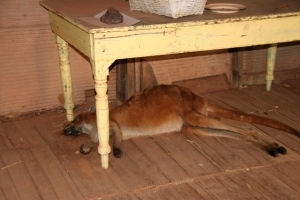 The aim (ha!) is to galvanise our womenfolk into action and upgrade those shotguns, as feral animal control indoors can be messy. Rural Australia and possum-infested suburbs will also benefit by raised awareness of indoor recreational shooting.