Norman Lindsay probably didn’t waste too much time studying economics in his young turn-of-20th century days, as the ‘dismal science’ hadn’t yet occupied our collective imagination. Although he may have read something of Adam Smith, its erstwhile 18th century godfather, who gave economists lots to chew on for the next three hundred years; and his contemporary Keynes, formulating soon-to-be influential economic growth theories; or even good old Malthus, still the reference for exponential population growth.

Undoubtedly Norman had more fun painting, illustrating and writing. Unwittingly though he may have been inspired by this economics stuff in his creative musings and given life to The Magic Pudding. Although considered a children’s story, which he both wrote and illustrated, it’s full of adult metaphors and themes, and one of Australia’s best-loved books. The genius of Albert, the Magic Pudding, is that no matter how much you eat him, he always grows back. Strangely, he’s also a grumpy pudding, who likes getting eaten, but we’ll ignore that for the purposes of this expose.

Now this metaphor business can get messy, so you have to concentrate hard. Firstly, the pudding is obviously the definition of the ultimate renewable resource, so over-consumption is not a problem. Although what happens if you just gulp Albert down in one bite is not really clear. Leaving that existential speculation aside too, this is where Lindsay may have something to answer for. Many Australians and others seem to think that the Earth’s bounty, aka plants, animals, minerals, water and even its atmosphere, are also magic puddings. Alas, science has shown us that this natural bounty exists in a fragile state of equilibrium.

Meantime economists have convinced us that continual growth is the necessary measure of our economic survival. But 1 to 2% GDP growth and 1% population growth compounded over only 100 years produces a world population of 18 billion and energy consumption 10 times greater than today.

So this fatal combination of magic pudding and endless growth thinking seems to be on a collision course with reality. The economist Kenneth Boulding noted though “that anyone who believes exponential growth can go on forever in a finite word is either a mad man or an economist”. Unfortunately economists share their delusions with most politicians, businessmen and much of the populace. Actually so-called neo-classical theory predicts that developed economies will reach a ‘steady state’ of growth. What sort of numbers that involves is not spelled out, but maybe some of the Western world is getting there (e.g. Japan). In any case, it seems low growth could be the ‘new normal’ for many developed countries.

Getting rid of magic pudding syndrome however is going to be a very difficult task, particularly with leaders like Bunyip Bluegum, Bill Barnacle and Sam Sawnoff in charge. Read Lindsay. Finally, no attack on the charlatan anti-social ‘science’ of economics is complete without repeating that old adage about putting all the economists in the world end to end and still not reaching a conclusion. 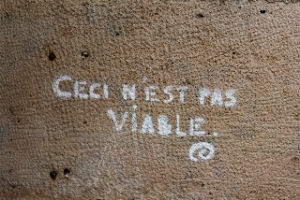