Pope Francis has released a ‘papal exhortation’ of 223 pages of critique on modern life and capitalism. What a contrast with his predecessor Ratzinger, defender of doctrinal faith and church crimes, whose tenure was untenable, and who did well to sack himself.

Inter alia, Francis aka Jose Mario Bergoglio, had this to say about our enlightened and prosperous times:

“While the earnings of the minority are growing exponentially, so, too, is the gap separating the majority from the prosperity enjoyed by those happy few. The imbalance is the result of ideologies which defend the absolute autonomy of the marketplace and financial speculation…. A new tyranny is thus born, invisible and often virtual, which relentlessly imposes its own laws and rules…. The thirst for power and possessions knows no limits. In this system, which tends to devour everything that stands in the way of increased profits, whatever is fragile, like the environment, is defenseless before the interests of a deified market, which become the only rule.”

Liberation theology is not dead. Go Francis, you good thing! 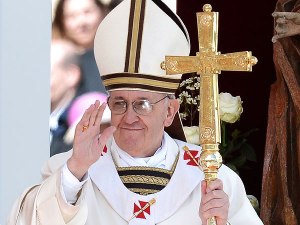