Explorer extraordinaire Ludwig Leichhardt had lots of luck throughout his short life, but he pushed the limits so hard that it finally gave out in 1848 when his expedition disappeared into the Australian interior, never to be found. He lived his dream and his life story is a most extraordinary adventure. He died way too young, at thirty four, and the world was deprived of a superb intellect and polymath.

John Bailey’s terrific book (published in 2011) about him is titled ‘Into The Unknown, The tormented life and expeditions of Ludwig Leichhardt’. As he did with the life of John Macdouall Stuart, another of the great white explorers of early 19th century Australia (‘Mr Stuart’s Track’), Bailey gives a fascinating portrait of another incredibly courageous and obstinate personality.

Ludwig’s early life in Prussia, prodigious interests in all the sciences, mastery of languages, his friendship with John Nicholson (& his brother William who sponsor him) and travels together by foot across Europe, are the prelude to Ludwig setting off to Australia with a burning ambition to unveil the secrets of it’s unknown interior. Aboard ship he uses his amateur medical knowledge to successfully treat fellow passengers who refer to him as ‘doctor’ and the moniker sticks.

The heroic expedition of 1844 was to make Leichhardt a major ‘celebrity’. After enduring incredible deprivation during fourteen months of their inland journey from the Darling Downs the skeleton-like expeditioners finally arrive in Port Essington on the Cobourg Peninsula of far northern Australia. Long since assumed dead, with press obituaries, back in Sydney Leichhardt is feted as Prince of Explorers.

Bailey quotes generously from Ludwig’s diaries and letters and so we hear the voice of this solitary and driven character, whose only focus was the pursuit of scientific knowledge, even collecting plant and animal specimens while struggling to survive in the harshest conditions. Museums here have over 5000 herbaceous sheets prepared by Leichhardt, only a fraction of his collecting. He identified over 200 plant species unknown to botany.

Bailey says Leichhardt has been honoured in Australia like few others: ‘Named after him are streets, a parliamentary electorate, a river, a gorge, a range, numerous plants, a tree, a grasshopper, a fish, birds, hotels and a football stadium. Plays, books, poems, songs and even an opera have been written about him’. And a municipality in Sydney. Patrick White of course based ‘Voss’ on Ludwig. Reading this book is a tiny tribute to this remarkable man who so captured our collective Australian imagination of yore 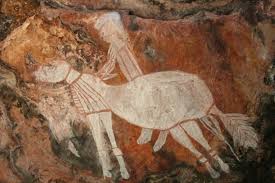