The great French writer died sixty years ago last Saturday in a car crash. He was 46 years old and winner of a Nobel Prize for Literature. Camus was born in Oran (western Algeria) and became a key figure in ‘existential’ writing, along with Jean-Paul Sartre.

His best-known book, L’Etranger, translated as The Stranger or The Outsider, and set in colonial Algiers in 1942, portrays the metaphysical struggles of Frenchman Meursault, who inexplicably murders an anonymous Arab.

In 2013 Kamel Daoud, in his brilliant first novel, Meursault, contre-enquête (The Meursault Investigation) responds to Camus, by inventing the missing Arab character (the ‘other’) and his brother as narrator.

I have a soft spot for Camus after living in Oran for a year (1975-76), as a newly-minted teacher of English as a foreign language – after Algeria’s hard-fought independence from France in 1962. My stay there was 43 years ago, living at 43 Rue de la Vieille Mosquée.

In a recent book Giovanni Catelli claims that Camus’s death was in fact deliberately caused by KGB operatives to get rid of a high profile critic of Soviet repression, with the complicity of a French government seeking rapprochement with the Soviet Union. U.S. writer Paul Auster is a notable supporter of the theory.

A favourite Camus short story in his Exile and Kingdom collection is L’Hote, which ambivalently translates as either The Guest or The Host. In remote mountains in Algeria, French school teacher Daru offers hospitality to Mohamed, and must deliver him to face colonial justice.

Viggo Mortensen played Daru (in French) in a film version, Far from Men (Loin des Hommes), which captures the haunting ambiguity and tensions of that time and place.

To commemorate the anniversary of Camus passing, I recommend the film for non-readers. And for everyone else, the new double act of Camus and Daoud, in that order. For a complete Camus primer you can add his allegorical novel The Plague (La Peste), set in Oran, and The Minotaur essay on life there. 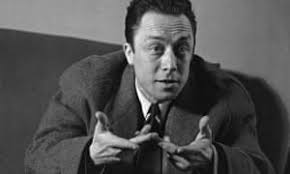