‘Sculptures by the Sea’ is a hugely popular annual event at Sydney’s Tamarama Beach with sculptures along spectacular cliff tops, and 500,000 visitors. This year’s controversy generated PR frisson and backwardness.

‘Little Boy Lost’ by Paul Trefry is a life-like but oversized fibreglass rendition of a naked small boy with a spaced look. After initial exposure, so to speak, it was decided that it’s nascent willy could shock families, encourage pedophiles or whatever. Event organisers girded his loins with grungy speedos. This pre-emptive strike was self-censorship at its worst, as there had been no public complaints. Weasel words from the event director and local council were the only justification offered for this ridiculous modesty.

After a few days the artist finally revolted over this pathetic intrusion and removed the offending cossie, hopefully restoring lost boy’s innocence, and threatening to withdraw the sculpture if he was contradicted. References to Bill Henson and utterances from child protection lobbyists were rife, but common sense prevailed and of course the sculpture has entertained the masses. Council and the event director ducked for cover with more weasel words and now nobody was responsible for the original decision to censor.  Bravo Paul!

Folks, its actually made from fibreglass, not pulsating flesh, and represents the most natural form of naked innocence, found of course ironically on all Australian beaches. It’s amazing and scary how self-appointed moral guardians and anti-pedophilic hysteria can induce muddle-headed and reactionary thinking in people who should know better. Fortunately Fahrenheit 451 had not been applied to the event catalogue. 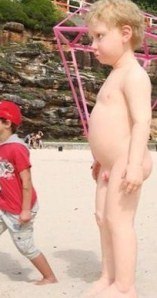 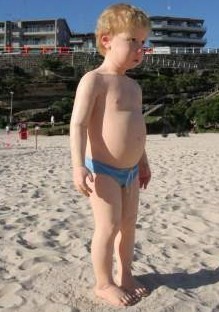